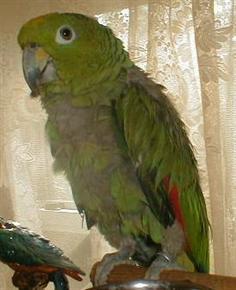 The doorbell rang yesterday morning, as I was cleaning up. I opened it to find the man who had given up Webster, the greenwing, standing there with his Mealy amazon, Zazu. He had bought both birds from a sad situation in a pet store, but his landlord didn't allow him to keep the birds, so could I please take Zazu and keep him in Parrot Haven, not to be adopted out? I had had this discussion just a month ago, about having too many birds, but he really liked the way my husband & I took care of Webster and would feel comforted if Zazu remained with Webster. So Zazu just became another permanent resident. He weighed in at 525 grams & is a year old. His feathers are a little picked because of the dry heat situation at his former home. He growls like all Mealy's do, but he doesn't bite. I lost a Mealy last year to cancer, so maybe this is God's way of replacing him. Dennis gave him a shower & shampoo with a no tears shampoo and he's looking better already. He's a little jumpy, but we'll work with him. Once he's comfortable in your arms, he bends his head, waiting to be petted. He'll be a great bird once he's settled in, with his typical quiet Mealy temperament.
Update 6/3/02
Zazu has been renamed Peanuts after another mealy that I owned that  had died of cancer. Their temperament is so much alike. I didn't intend to rename him, but he looked so much like my mealy, that calling him Peanuts came naturally. He makes the same loud call & puts up a fierce front just like Peanuts did, but is just as friendly and handable as Peanuts. He gets along very well with Feathers, my Hispaniolan Amazon, hanging out on the playpen continuously. Once in a while, he'll clim off the cage and wander into the kitchen. I have no clue as to what he wants but he seems to always be searching for something. What a great bird.
Update: 1/2/14
Peanuts still resides at Parrot Haven.  He's still wondering around aimlessly, but remains a great bird.  He is shown here with some of his friends.
​
​. 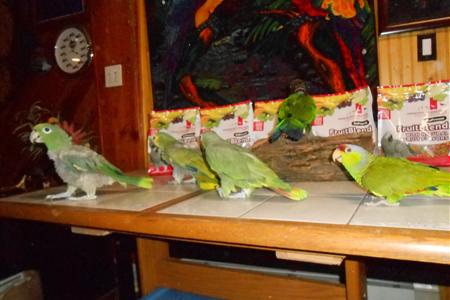