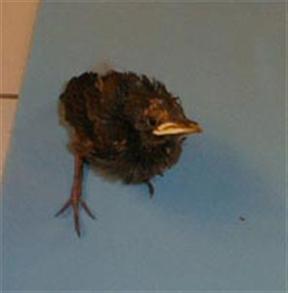 I got a call on the Parrot Hotline yesterday from a gentleman who wanted to know if Parrot Haven took in wild baby birds. I have only taken in hookbills, but figured why not. It's a baby that needs help. It seemed that a nest had fallen at this mans' workplace. One of the birds was killed in the fall, but Star survived. I'm guessing that he's 3-4 weeks old. I tried feeding him formula but he really didn't care for it. His finder had been feeding him worms, but I'm not into worms. I did discover that he loves scrambled eggs, so I keep a dish of eggs available, and everytime he squawks, whoever happens to be in the room, drops a bit of egg in Star's open beak. He gobbles it right down. At least his food doesn't have to be mixed and heated to perfection. Obviously, Star isn't for adoption. As soon as he is able to fend for himself, he will be released. I know I won't feel right about sending him into the wild blue yonder, but hopefully he'll acclimate when his time arrives.
..