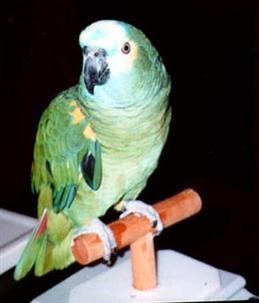 I received a call about 6 months ago, from a New Jersey member. A woman from had an amazon
to place. Could the bird go into the Parrot Haven.? I happened to have an empty cage at the time,
so I said sure.
After the initial request I didn’t hear anything for awhile, so I assumed that the bird had found
alternative arrangements. That’s fine. That always leaves an opening for another homeless bird.
Then I got another call, concerning the same bird about a month ago. I asked another NJ member
to please pick up Sea Biscuit. If he got along with the bird then he would keep it. If not, he would
drop off the bird when he visited Long Island.
Sea Biscuit was an intimidating Blue Front. Beautiful, but bold. One look at Bob and "Crunch."
Bob then figures this bird is more than he can handle and bought him out to NY. My husband,
Dennis, takes the bird, flips him around a few times, cuddles, and snuggles with Sea Biscuit.
This bird is a mush. I weigh Sea Biscuit. 380 grams. Sort of underweight, but in good feather
and color. Our adoption chairperson, John, makes a call and the bird is adopted within 2 hours.
Before I can clip him or culture him, but the adopter said he would take care of this at the vet’s office. (I had taken a nap, and in the meanwhile, Dennis placed Sea Biscuit with his new “Dad.”) Dad bought a good as new, used cage. Left a message that the bird was doing great. Next thing I know, two days later, Sea Biscuit and Dad are at my door. "He’s more than I could handle." Would I take him back? Of course, I would. Not every bird is meant for every person. Sea Biscuit, being an amazon can be a little foreboding, so he went back into his quarantine cage. I give "Dad" credit for admitting that he could not handle Sea Biscuit.
Dad will be eligible for another bird, of which I immediately thought of Mikey, a previously adopted bird, who had gone into a breeding situation, but is too friendly to remain there, so he is currently looking for a home. Since Dad had already bought a baby Meyer’s from Mikee’s adopted Dad, this would be a good match, but that’ll be another story.
Update 09-16-01
Sea Biscuit was adopted by a member from Westchester County. He spent some time here going over the birds habits, then set out for the long ride home. Sea Biscuit had a few problems settling in with his new Dad, but things have worked out well. Dad wasn't used to the temperament of an amazon, but soon learned to realize what the flared tail and pinpoint pupils meant.
.
View on Mobile