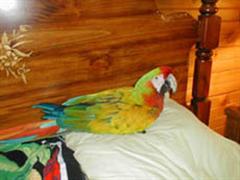 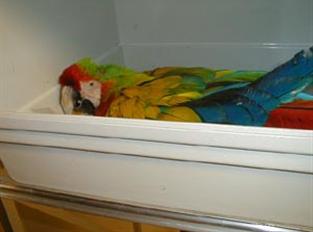 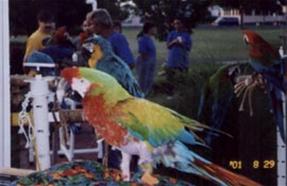 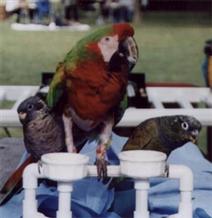 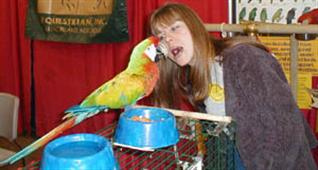 I very rarely take a day off from work or from my duties as Administrator of Parrot Haven, but one day, I decided to go and hang out at Kings Cages, with my friends * owners, Rich and Andrew.  I got a call from Barbara M, who told me that a macaw, who was living outside had been attacked.  He was bleeding profusely and not expected to live.  HIs owners didn't not want to be be bothered with Psycho when he was healthly, and certainly didn't want to deal with him now that he was injured.  They kept him outside, since he was nasty and screamed a lot.  So much for a day off.  Work never ends.

Barbara took Psycho immediately, to Dr. Robert Monaco, of Old Country Animal Clinic.  His condition was serious and he was not expected to live.  Dr. Monaco made Psycho comfortable and explained that his injuries were life threatening and most likely had been attacked by a raccoon.  Barbara explained that the owners gave up Psycho immediately and that he would need to be rehomed, since they did not want to be financially responsible.

After a few days, I went to the vets office to feed the macaw, who is a Shamrock Macaw,

which I've renamed Rescue. Rescue spent about 4 years locked in a crate in a

basement, before being placed in the greenhouse, where he and his fellow

mates were fed sporadically. Rescue ate 25cc's of formula. He also ate a

banana and apple from Dennis' hand. His leg is swollen to twice the size, but

his eyes did look alert. You could tell he was in pain, but thank God he is out

He's eating on his own, devouring the assortment of mixed nuts and

cheesesticks that I bought him. I also hung a toy in his cubicle. Dr. Monaco

stated that the wound still continues to remain gaping, after the muscle and

tissue were torn out. He will remain in the hospital for several weeks, and if the

wound doesn't heal, a skin graft will be attempted. "Rescue" allowed me to pet him, as he lay on his belly, unable to perch at all. He was barely able to move one toe on his right foot, indicating that there might be some hope of minimal recovery. He looked so sad but I know that he is receiving the best care possible, with Dr. Monaco treating him.

UPDATE JULY 20, 2000
I went to visit "Rescue" today. He grabbed the walnuts from my hand. I also assisted the vet with the bandage change. "Rescue" has circulation to his foot and was able to slightly grab my finger with his toe. The wound is the length of his leg and the tissue was necrotic, which was debrided, but there was also blood in the leg, indicating circulation. It is still touch and go. He is able to stand on the other leg, but chooses to spend his time lying down. He was so good, just squawking occationally. I guess he realizes that we are there to help him.

UPDATE JULY 28, 2000
Rescue had plastic surgery last week. Skin from his abdomen was grafted this leg and the wound was sutured together. When I went to visit him yesterday, he was actually standing for the first time in three weeks. If his recovery continues to progress so successfully, he may be able to be released from the hospital next week.

UPDATE AUGUST 06, 2000
Dr. Monaco performed another skin graft on "Rescue." A lot of his leg remains open, with exposed tissue, tendons and veins.. There is no other part of his body to graft skin from. He may still lose the leg. He has contacted a vascular surgeon, who will evaluate the situation. There is talk of amputating the leg, since it couldn't survive without any skin. This dedicated vet has come such a long way with this bird. I hope that the surgeon will have some new insight on the case. It has been 4 weeks since the attack.

Rescue came home yesterday. The skin graft to his leg is about 75% effective and it will be several months before it is finally healed. Diana, Dennis and I just changed his dressing. It hurts me to hear his cries as he is restrained, but all in all, he was pretty accepting of his treatment. There's about an inch of darkened tissue that still has to heal. Rescue has been very good considering his ordeal. He is accepting kisses and has allowed me to pet him. He doesn't scream, but cries when a hand approaches him to quickly.

He is eating and drinking well. He had cheesecake this morning for

breakfast and really enjoyed this treat. After spending 20 years in a

box in a basement, then a few years in the greenhouse, I know he is

appreciative of his new home. He spent 2 hours out on the enclosed

deck today, with my baby scarlet. Each stayed at opposite ends of

the perch, but it's a start to introducing him to the rest of the flock.

Rescue is fully flighted, but I will keep him unclipped at present,

since he has difficulty walking, and I believe his wings will assist

with his balance. Considering he has contracted toes, he does seem to climb extremely well.

UPDATE: AUGUST 25, 2000
Rescue just got back from his surgical consult with Dr. Leonard

Kleiman, a general surgeon, a human vasular surgeon. I work with Dr. Kleiman at

Brunswick Hospital and he offered

to take a look at Rescue. The wound is healing nicely. Dr. Monaco

did a great job with the skin grafts. Dr. Kleiman removed the stitches

need any medication at this time. All the staff from the surrounding

medical offices came to see who was honking, thinking the sounds

were coming from a honking duck. Diana was even allowed to take

a break from her duties at the hospital and come over to assist,

along with Dennis, in restraining Rescue. Rescue then went to the

hospital where we work, and got to see everyone who has been so

interested in his care. He had an exciting day. Dr. Kleiman is a

human MD, not a vet, but a member of PFC who generously donated

his time and skills to examine Rescue. Thank God for people like

Drs. Monaco & Kleiman. Rescue is eating well, weighing in at 1000

grms. Rescue gets along well with my other macaws, but still remains housed separately, for safety reasons.

UPDATE: SEPTEMBER 16, 2000
Rescue continues to do well. He loves hanging out on his perch. He has never been caged and makes no attempt to leave his little environment. He loves to spend time with all his little Co-residents such as the grey, conures and any amazon that I placed in his territory. He seems more comfortable with the smaller birds as companions. As you can see he had a great time at this years PFC picnic, sharing a perch with two pionus'.

UPDATE: NOVEMBER 26, 2000
Rescue is doing well. The wound on his leg has completely healed, though he has permanent nerve damage. He is happy hanging out with the other macaws in his family.

DECEMBER 20, 2001
Rescue is spending his 2nd Christmas in Parrot Haven, happily surrounded by his peers. You can see how deformed his right foot has become, but he walk on it very well. He's eyeing me while I iron. He still has difficulty perching but loves riding around on his pillow.

UPDATE: 6/3/02
Rescue continues to thrive nicely. He loves hanging out in the yard with the other guys. He might be moving out of state to reside with the person who originally rescued him from his horrible situation. Someone who has known him for over 15 years and realizes his special needs.

Dr. Monaco, of the Old Country Animal Clinic in Plainview has just verified that he will absorb all costs involving "Rescue". This is very generous of him and members of the Parrot Fanciers' Club are eternally grateful for his care and concern. In the future, if "Rescue's" leg needs to be amputated, there might be additional fees. If you care to donate for his cause or to assist the numerous Parrot Haven birds, please remember that your donation would be tax deductible.

Rescue lead an active life, attending many events and was in the public eye.  He could be very loving, but had a nasty side but who could blame him, after all he had been through. I checked on him everyday when I came home from work. He was doing well.  2 hours later, I found him dead in the bottom of his room.  There had not been any signs of illness or odd behavior.  He will be missed.  His last years were happy ones, kept in a warm home and being fed on a daily basis. He knew he was loved.