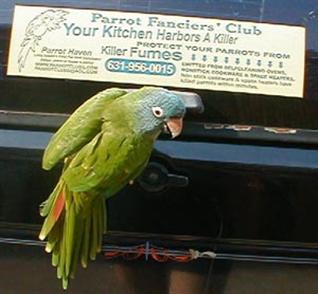 A lot of the members were at my house helping out with a car wash to raise funds for the Parrot Haven when I received a call from a coworker who stated that there was a big green bird in a tree, in her back yard, just down the road from me. Rey, Dennis & Frank went down there immediately & set up a cage, complete with string attached to door. Rey almost enticed this very hungry bird with some seed when the branch snapped just as the bird was reaching him. So the cage was left. I got a call several hours later that the bird had been captured. By the time I got there, he had escaped from a gap in the bars. This time I taped up the space and the bird was caught by some caring neighbors by the next morning. An ad was placed in Newsday, but so far no one has claimed this beautiful bird which had been fully flighted. He was very patient as I proceeded to clip his wings without any problem. If anyone tries to claim this bird, they will have to state his physical disabilities & speech pattern in order to claim him. He is not available for adoption since the family who assisted in his capture have offered to give Paulie a home.
.