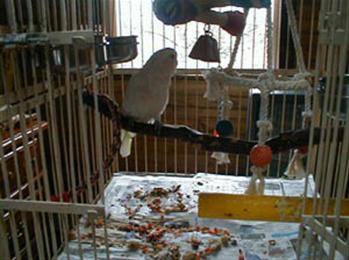 Pablo is about 4 years old. He/she came into Parrot Haven in
April, 2000, when his owner moved in with her parents, who did
not want Pablo in their house. Pablo is a beautiful cockatoo. A
little skittish, but I feel this bird can be worked with. Several
people have shown an interest in Pablo. Is your adoption
application filled out?
Update Sept 16, 2001
Pablo was adopted by Sophie a year ago. He has adapted to his
new home remarkably well. He is surrounded by a flock of 8 other
assorted parrots. Pablo is vocal now that he is comfortable in his
new home. He dances, performs tricks & sings. His feathers have all grown in,
and he is proud to display his new tail feathers.
.
View on Mobile