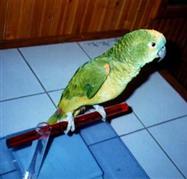 Blue, named by his rescuers, was found sitting on the front porch of a local home and taken to the
Parrot Haven by members of our Parrot Recovery team, Steve & Sally.
This was a very friendly bird, so I assumed his owner must be heartbroken and searching for him.
Ads placed on the internet and in several local papers were unsuccessful in locating the owner.
Blue had several infections and his medication was expensive. Recultured after being medicated,
Blue came out clean and healthy. After 3 months, Blue was placed in the home of a local couple who
own several birds. This couple spent several hours bonding with Blue prior to agreeing to adopting him
and absorbing his $200. medication bill. A fee of $50 is usually requested to help with Parrot Haven costs,
but since Blue’s medications were so costly, and PFC did not want to place an additional financial burden
on the adopter, this fee was waived. A good environment is more important than additional monies in this
case.
Blue was adopted by long time friends of mine and is quite happy in her new home, amidst a macaw, another amazon, a quaker and a cockatoo. She has been renamed MIMI, due to her singing "MIMIMIMIMI" constantly.
Update 6/3/02* I have visited Mimi several times. She now has a wonderful feathered companion and is doing extremely well. She'll be moving into her new improved room when she moves into her newly built house in a few months.
.
View on Mobile