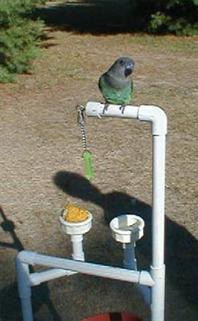 Meyer was bought to my house in a paper bag. He had been found in someone's yard, & had no idea how to take care of a parrot, knew we had birds, and dropped him off. He was actually the first resident in the Parrot Haven & made a TV appearance on the Chauncey Howell Show, in an appeal to find his owner, with no luck.
He appeared to be a baby, since the yellow didn't seem filled in on his head. He was very friendly, so I thought for sure that his owner would be looking for him. But alas, that was not to be. I advertised in several newspapers and on the internet.
He was adopted by a close friend of mine, who just happens to breed meyers. Meyer was renamed Mikie and is doing well in his new home.
Update:
Mikie's owners moved into a new house and don't have time to spend with this very friendly bird. They have many breeder birds and feel this bird should be in a more one to one situation. They are looking for just the right owner.
Update 09-16-01
Mike was returned to Parrot Haven, simply because he was so friendly and the breeder who adopted him felt bad that he could not devote more time to this lovely bird, due to his growing family. He was readopted by the President of PFC and is doing well.
.
View on Mobile