Max is 13 years old and has been in 3 homes due to his typical amazon personality.
I refer to him as a he, because of his name, but he has not been sexed. Max was housed in Carol's home for a while and is now in Parrot Haven. Max doesn't seem to like females. So far he's been great with me, but that's the typical honeymoon period. He gets along great with Dennis, so I feel that Max should go to a male. he weighs 430 grams. He appears to be afraid of hands and needs some work. Hasn't made any attempt to bite. Dennis was allowed to pet him after 3 days. I believe this bird would do best in a home without small children around due to his history.
He loves his almonds and baked potatoes. His feathering is ok, but needs a little brightening. He seems to get along well when visiting with other amazons and shows no fear of the macaws. Is there a stable home out there for Max?
He's really coming along nicely. if he doesn't get out of here soon, I'm going to want to keep him.
Max has come a long ways in the short time that he has been here. He's very eager to step up when he's in his cage and he's even letting me pet him. I see this bird miraculously coming out of his shell a little more each day.
. 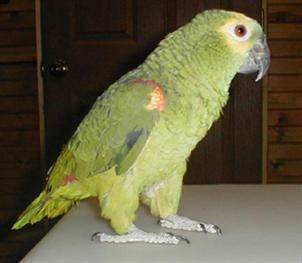