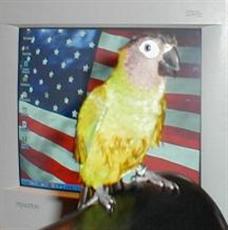 Kisses gets his name because he gives lots of kisses. He's hanging out with me as I work on the computer, after he took a shower. He's very lovable and will jump off his cage and climb up your leg. Loves hanging out all day on your shoulder. Great eater.
Update
Kisses was adopted by Lana at the October PFC meeting. Kisses used his charm to convince Lana to take his home. Lana has previously adopted a timneh and is making great headway with this lost soul.
Update 6/3/02
Kisses was returned to Parrot Haven due to his screeching. Lana was afraid of getting thrown out of her apartment. Kisses wasn't even back in Parrot Haven for 24 hours when he was adopted by someone who was enthralled with his friendliness and didn't mind the noise.
​