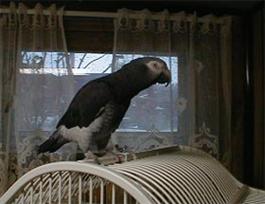 Kelly came into the Parrot Haven, along with a lovebird, just before Christmas. His owner had severe allergies and had to wear a respirator amidst all my birds. He had Kelly for about 7 years, before being forced to place him. Kelly will remain in the Parrot Haven since that is the owners' specific wishes.
Lovebird came into the Parrot Haven, along with its' timneh companion. His owner had severe allergies. Even though his owner wanted us to keep him, I was fearful of having the lovebird in my home, since he might become lunch for my macaws. He was very tame and spent a lot of time out of the cage. He was placed in the home of one of my coworkers. Lovebird is a star, having made an appearance on the "Later, Today" Show, with Florence Henderson & Warren Eckstein.
Update 09-16-01
Kelly was adopted by a member who became very attached to him after stopping over for a few visits, with no intent to adopt a bird. but you could see a bond was quickly formed. The original owner was contacted and agreed to let his bird go to a home where the owner only had one other bird. Dennis and I had mixed feelings about letting Kelly go, but as long as we had PERMISSION, I felt at ease placing him. Kelly is a doll and I was sorry to see him go, but then I must realize that I cannot keep every bird that comes in. It's great finding good homes for the birds.
​
View on Mobile