I received a call from a wildlife rehabilitator, located in Westchester County, last
December, who needed to place a cockatiel and a pigeon. I usually would not take in
a pigeon, but I know of a local breeder, who agreed to take the pigeon, so I said I would
place him. I also knew I would not have a problem placing a tiel. So the problem now
was how to bring the birds to Long Island, about a two hour trip. At a meeting of the
Parrot Fanciers’ Club, an announcement was made that a volunteer was needed to
pick up these homeless birds. I received 4 volunteers. PFC has such good members.
Anyway, Mary agreed to make the long trip. When she got there, she was given 3 carriers. Not bothering to look in the cardboard containers, Mary dropped the tiel off to its new home in Brooklyn, then proceeded to my home. I surveyed the pigeon, then asked what was in the other box. "I don’t know. It was just handed to me." I was surprised to find a beautiful white dove. I hadn’t counted on one, but she was here, so I set her up in a spare King’s cage. I hadn’t a clue as to what to feed a dove, so I called a member who owned two.
Roudybush crumbles, scrambled eggs, and wild bird seed is a normal diet for a dove.
She appeared to be very friendly and would get very antsy each nite, pacing back & forth.
I had been advised not to clip dove wings, so she remained fully flighted.
My husband finally let her loose. She just wanted some freedom. Each night she would
hang out on the ceiling fan blades, flying to the top of the refrigerator, to the kitchen fan,                                 then back to the living room fan, then to the macaws large room. I worried for her safety
at first,but soon found out that they didn’t mind this little visitor. She loved going for her
nightly rides.

I kept Dovey for two months before taking her to a PFC meeting, where she was immediately placed with one of the members. I only requested that Dovey remain flighted, not something I have ever requested before, and that she be allowed flight time each evening. With a dove’s rounded beak, you don’t have to worry about furniture or fingers being chewed up. She was really an ideal pet. She’s doing great in her new home and I know now that I will never turn down another dove. 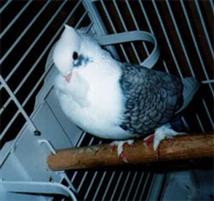