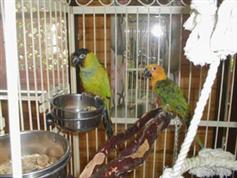 I had received a call from a good friend a few months ago, Arthur Freud, pervious owner of "Cage Bird" magazine and author of "The Complete Parrot" & "All About The Parrots." He had a friend who wanted to give up a few birds. I called this man, and left a message but never did receive a call back. That's ok. A lot of donors need time to make this heartbreaking decision. Eventually, I was contacted, and I was asked if there was room in Parrot Haven.
I was placing a cockatiel the very next day, so I had that cage available and I had a few other empty cages in the house. The birds were dropped off at my house as I was on my way to the lab, with a culture taken from Sea Biscuit, the blue fronted amazon, who had just been placed with a man residing in Westchester. What the heck, I thought. As long as these guys are here, I took 3 more cultures. I now had 3 conures in residence. A blue crown, a nanday and a jenday. After making them comfortable, weighing and trimming wings and nails, I dropped all specimens off at the lab. (All Parrot Haven birds are cultured to see if there is any possible infections or bacteria.)
All birds were fully flighted and took a last flight before succumbing to the scissors. All birds
just lay there, not struggling at all during their treatment. They were unbelievably friendly and
docile. I had happened to call one of my board members, Barbara, and was telling her how
friendly Cleo was. I could scratch the area around his eyes, face, belly, wings, and not one
nip. This was a great bird. Someone will love him immediately.
Then Barbara expressed an interest, saying that she had always wanted a blue crown
conure. I told her the bird was hers and made plans for her to pick Cleo up. The introduction
went well. Cleo took to Barbara immediately. Barbara paid the lab fee along with a generous
donation for Cleo. I was glad to know that this bird had gone into such a good home.
Barbara called back to let me know that Cleo is getting along well with all family members.
Africa & Nanday is a very bonded pair. They will have to be placed together. When Nanday hops on my hand, Africa follows immediately. They are both extremely friendly birds, in good feather. A little noisy at times, but nothing compared to the screeching of 10 macaws.
Update 11-26-00
Nanday & Africa have been adopted by Anthony, who already owns a conure. They have been appropriately renamed Shadow & Screech, and have the run of the house.
Update 05-15-01
Nanday & Africa are once again available for adoption and must remain together since they are bonded to each other. Their "Dad" loved them, but due to ill health, was unable to keep them. They have been renamed Screech & Shadow, which seemed more appropriate.
Update 09-16-01
Cleo relocated to Pennsylvania with her new family and remains a great bird. She likes to taunt the macaws then fly back to her perch. She lives in a large room with full windows and skylights. It's as if she is living in a jungle.
Africa became attached to Zeek and was renamed Zeekette. They make a lovely couple as they flit around the cage and playpen. Zeekette is very protective of Zeek and atttacks any other bird if they come in close proximity of the cage, such as when walking by with another bird on my shoulder.
​
...
...
View on Mobile