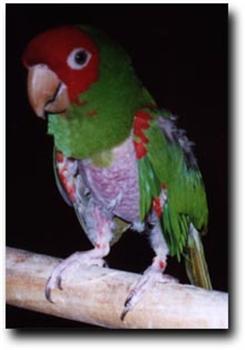 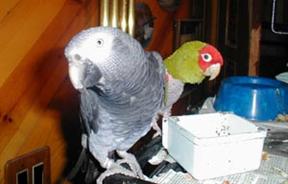 I guess everyone wants a fully feathered, friendly talking bird.

Since the caller seemed in a desperate situation, I decided to trek out and pick up the bird. I needed this like a hole in the head, already housing 20 birds, but then what the heck is one more. I figured I would keep him until I found him a home. Chuckie was kept in a very neat home, but I believe that he was only being fed sunflowers seeds, not a very sufficient diet. His dishes were dirty, which is nothing new. You can change them several times a day, and they can still always look cloudy.

I was told that Chuckie had been in this home for 6 years, having been given to the owner when he was a year old. I guess the novelty of owning him had worn off. The kids were grown, and it had become a tedious chore to clean up the messy cage. It had been months since he had been out of the cage and his cage was covered promptly at 7:30 each evening, in order to quiet him down. I had a nice talk with the owner, who signed surrender papers and helped me take Chuckie and his meager possessions of a bag of food and one toy to the car. It’s always sad splitting up a family and I told the woman that if she changed her mind that she could always has Chuckie back. Lifestyles change and commitments can not always be kept.

On the way home, Chuckie kept trying to bite me, as I would try to pet him through the cage bars. I figured that I would leave him alone when he got home until he was acclimated to his foster home. But no, my husband, Dennis had to take the bird and explore the house. This bird was so excited to be out of his cage. He was also fully flighted so off came the flight feathers and his nails were clipped. Then he was allowed to spend time in his cage to calm down.

Since it’s been 3 months that he has been in my care, I can only assume that his follicles are so badly damaged that there can be no more feather growth. Meanwhile, I made a few calls to try and place Chuckie. I had become attached to him and wanted to place him in just the right home. I even bought him to one of the monthly meetings to meet his possibly prospective parents. Many people swarmed around him, but in the end, I realized that I did not want to give him up. His crazy antics had charmed me into submission. I own many macaws. What did I need with a little bit of a bird, with a naked chest, that only weighed 155 grams? But when I was faced with him being taken away, I could not proceed with giving him up. So Chuckie remains with me, dominating his perch. Still won’t get on a finger, but is always willing to jump up on anyone’s shoulder.
Just goes to show you that a happy, adjusted bird isn’t always going to be the one with the perfect feathers. When you go looking for your next bird, think of all the foster and adoptable birds that are yearning to be loved. You might get lucky, just like me.
Update 09-16-01
Chuckie is king of the roost as he maintains his domain on the playpen of his cage. About a year ago, I introduced my first born timneh, Kayla to Chuckie and it was love at first sight. Chuckie is still hand shy but he is glued to Kayla 24/7. They make a wonderful odd couple.