I recieved a call a few months ago about this odd couple that needed to be placed together, since they had been together for 12 years. Bogart is a bare-eyed blue front(a new breed of amazon.) Godzilla had been raised by "Mom" since she was being handfed, hence the name Zilla. Mom's lifestyle had changed and she placed her birds with me only after she felt comfortable with the new "Mom" that I had chosen for them. Unfortunately, the new Mom is midway between relocating to another state, so I took in the birds temporarily. Bogart loves Zilla, but Zilla is victim to Bogart's mood swings, so they must be caged separately, but allowed visitation. "Mom" has taken Zilla and hopefully will soon be able to take Bogart, when the "relocation" process has been completed.
Update 6/3/02
This pair had to be split up since Bogart was continually attacking defenseless Zilla. The new Mom I had picked, did not work out since Bogart did not like the other amazon in the home. Bogart was adopted by a lovely woman who has time to spend with him. Zilla was recently placed in a foster home, along with another nanday that he became bonded with at the Parrot Haven.
​ 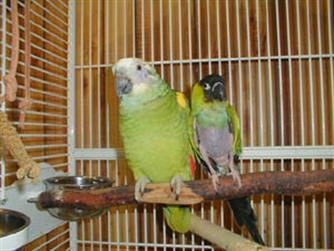