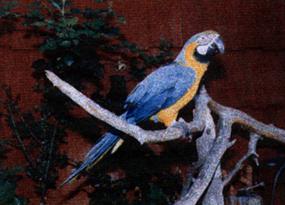 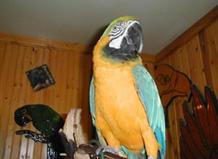 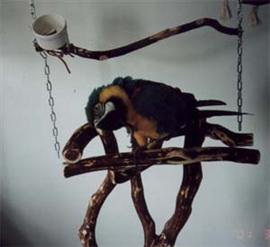 It was about 1PM and an unmarked police car pulled up to my driveway. An officer of the Suffolk County Police Department had stopped by to advise us that a macaw was on the loose. He had stopped by our house since it is known in the community that we have several parrots and are part of the Parrot Fanciers' Club. My husband went in search of the bird, but with no success. For several days, he went back to the sight location but still to no avail. Meanwhile, a woman called to report a lost bird. When I called her back, I said that the best time to try and capture the bird, since it was sighted in a tree, was when it was dark, so at this point, early AM or late PM would be great.

She didn't seem enthused about the early AM hunt.
She stated that it was her brother's bird and he knew
which tree it was in and that she couldn't leave the kids
that she was baby-sitting. I awaited a call back. Nothing
the next day or a week after.

I left messages, but could not understand why this person
would not want to get their bird back, but then I thought, to
each their own, and let it be. I was busy with my own
babies. One day I received an anonymous call that a big
parrot was seen in the vicinity of a particular residential area.
My husband scoured the neighborhood until he hit gold. Blue & Gold that is. A woman's neighbor had fed some crackers to this bird and he had walked into her house. My husband had left a note and the woman contacted us later in the day. She liked the bird, and wanted to keep it, if the owner never claimed him. Meanwhile, I received a call on the Parrot Hotline that someone had lost a blue and gold. Could it be a match? What were the chances?
The finder loved the bird and did not want to give it up, but after a week, it was destroying her bathroom. (she did not have a cage, and had made it's temporary home on the shower curtain rod.) I came home one day and found this strange B & G in my living room. Now I have several friends who have B & G's so I assumed I got roped into an impromptu baby-sitting job. Not quite. The finder did not want this bird because he was destroying the bathroom. I called the owner to let her know that I might possibly have her bird in my possession. To my surprise, I was told that the bird was not wanted back, because it made too much noise. I tried to talk her into being reunited with the bird, but it didn't matter. Another family member who owned the bird, said it was too noisy and didn't want it back. Keep it. Find it a home. So I put out feelers.
I found a prospective parent, who was highly recommended by my vet. He came over and met the bird, who by now I had named Beakless, because he was missing about a 1/4 inch from the bottom of his beak.
It was love at first sight. I was happy about the match, but I explained
that I needed a release from the owner, in case at some point, in the
future, the owner changed her mind. After 10 days, the owner called and
said they wanted the bird back and would pick up their bird. The potential
owner was devastated, but what could I do.
He was theirs. I contacted the family member who had said that he did
not want the bird in his home, and he said that the bird was definitely not
coming back into his home. Keep him. give him away. Do what I had to do. Eventually, I received the surrender papers.
To this day, I do not know the age or original name of the bird. His likes or dislikes. What a shame that he was in a home where the owners, bought him because he was big and beautiful, but had no concept of the time and energy that it took to house a huge bird, such as a macaw. When I called the potential owner, he was ecstatic. He immediately bought a huge King's wrought iron cage to make Beakless feel welcome in his new home, where he would have a cockatoo, an Amazon and a monkey as room mates. In the meantime, I had Beakless, cultured, since I did not want to have a possibly sick bird in with the rest of my flock. Luckily all tests were negative. The new owner was more than happy to pay the lab costs and adoption fee. Beakless was at last settled into a new home where he was definitely wanted.
Update July/2001
Beakless, Parrot Haven's first adoptive bird, had been returned to Parrot Haven after "Dad" could not deal with Beakless' nippiness. Beakless has now been adopted out to a man who has a separate building just for his parrots, with heat and electricity, where the birds have plenty of freedom. Beakless has been renamed "Max" and is doing well.
His new Dad has no problems with Max's behavior. It was just a matter of matching this bird up with the right owner. (Parrot Haven's policy is to take back any parrot if for whatever reason if the adoption does not work out. I don't want any parent who is unhappy with their choice of bird. No one is penalized if they have to return a bird, and that person is eligible to adopt another bird.)
Update 6/3/02
I recently visited Max in his beautiful, sound proof home, in which he is surrounded by a variety of other birds. He is so loved and in such a good situation.
.
View on Mobile