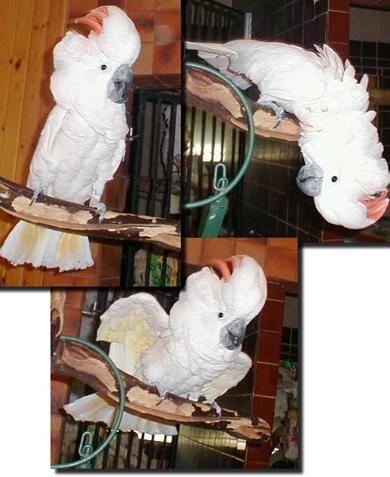 This Moluccan is a temporary guest in the Parrot Haven until his owner sells him. After having a conversation with Dad, I told him that Parrot Haven only deals with adoptions, not selling birds. But there are extenuating circumstances, so I agreed to house this gorgeous bird until he can find a home. His Dad bought him, not realizing how much noise a moluccan can make. Dad only had the bird a few days, and while his landlady didn't complain, she did state that the bird was screaming throughout the day. I guess he was lonely. Dad returned him to the seller who refused to give him a refund, just so that he could have a place to stay, but Dad did not feel right leaving this bird in the small cage that the seller had him in. In a few days, Dad had bonded and was in love with the bird, but at the same time is hesitant to bring the bird into his small apartment. The seller hadn't even bother naming this bird. Dad call the Hotline after speaking to a PFC. members, Cathy, Rob & Jo. Dad sounds like a real sincere guy. I agreed to take in the moluccan until he can be sold. He is gorgeous. Every feather is in place and he talks sweetly and does a mean wolf whistle. He screamed about half an hour after he arrived. I guess he was thrilled to see other moluccans. He has been quiet for the past week, except for when a guest stops over. I think he's just showing off. He's snuggable and cuddly, and follows the up command very well. Someone put a lot of work into this bird and he will be a jewel for his next owner. If you're interested, he can be seen be at the PFC monthly meetings or just email me if you'd like to make an appointment to visit him. Dad wants this beauty to go to a good home and is willing to negotiate any reasonable offer. Make an offer. This moluccan is a large bird, weighing in a 840 grams. It is recommended that any potential buyers own their home, so that when Moluccan voices his opinion, he doesn't disturb any neighbors. Please give him a home, a name and lots of love.
Update
THIS BEAUTIFUL MOLUCCAN WAS GIVEN A HOME BY ONE OF THE MEMBERS WHO HAS A SPACIOUS SET UP FOR HIS BIRDS. HE WAS NAMED CISCO AND HAS TRANSFORMED INTO A WONDERFUL PET.
..