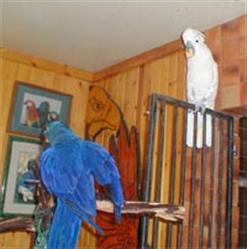 I received a call on the Parrot Hotline two weeks ago, concerning a woman who needed to place her beloved moluccan when it was discovered that she was allergic to her baby.
"Mom" had Julio for 11 years.  Her and her daughters were very attached to Julio, but wanted to find him a good home. I usually have Rey, the PFC adoptions co-chair, return the calls, but I returned this particular call.
I had a rather enjoyable conversation with "Mom", who informed me that she was very particular where Julio went, since she had previously placed him with a breeder who promised to keep Julio in his extravagant aviary.
"Mom" was very surprised to learn that this breeder cut off Julio’s band and sold him within two weeks. Luckily, she was able to get Julio back. This was appalling behavior on the breeders’ part, which brings to light the necessity to have a contract with any type of transaction. I have enough permanent residents in the Parrot Haven, and certainly wasn’t looking for another. I was telling "Mom" that I had fostered out a cockatoo and that Fred, my moluccan was all by his lonesome in his 4’x4’ tiled room.
"Mom" thought it over and decide that she wanted Julio placed with Fred. Diana and I went to Julio’s home and spent time snuggling with him. His Mom was always a little frightened of his size and hadn’t worked a lot with Julio. He seems apprehensive of hands, but loves to snuggle when wrapped up in a blanket or towel. Julio came home to the Parrot Haven and as soon as he saw Fred, there was all sorts of screaming and hollering. It was love at first sight. It’s quiet now after a few days of getting to know each other. Please don’t think Fred is mistreated or sick when you see their picture. He’s just getting his feathers back after nearly being preened to death by Coco the mutilator.
Julio is NOT for adoption, but the Parrot Haven does get a lot of cockatoos in.
The primary reason being their need to cuddle, scream and fluff their powder
all over the place. I haven’t heard a screech in a few days, so I guess they
must be happy.
Update 09-16-01
Julio remains content in the Parrot Haven, socializing with Fred. He is still
afraid of hands, and will only allow himself to be touched when cuddled in a
towel. He loves his cheese sticks and must have one a day or he lets you
know he is not content. Otherwise, he is a quiet bird. He is king of the roost
in his little world, surrounded by macaws, who run in and out of his "space"
occasionally. Such a good tempered bird.
Update 6/3/02
While Julio is not for adoption, he caught the eye of one of the members who agreed to foster him. Julio is still shy, but remains in gorgeous feather and seems to love his new placement.
Update 5/1/05
JULIO HAD ORIGINALLY BEEN IN PARROT HAVEN IN 2001. A GORGEOUS MOLLUCAN, WHO CAME BACK FOR A SHORT VISIT, WHILE HIS OWNER RELOCATED. IT WAS NICE HAVING JULIO REVISIT US, BUT IT WAS NICE TO SEE HIM REUNITED WITH HIS OWNER.
​
....                                                        .  .   . 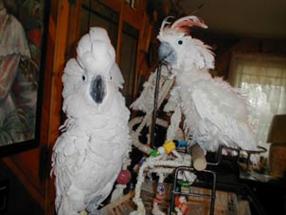 The bird that you see in the PIC with Julio is not sick. He was a victim of Coco's over aggressive preening, who has since recovered all his beautiful plumage, once Coco was fostered out.